Alcohol and other Drugs

Just like neurotransmitters are chemicals, so are drugs. They work in the brain by tapping into the brain’s communication system and interfering with the way neurons normally send, receive and process information.

Further information to explore:
Methamphetamines such as Ice work this way, where the nerve cells release abnormally large amounts of natural neurotransmitters. 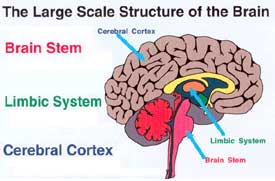 The brain regulates a person’s basic body functions, enabling them to interpret and respond to everything you experience and shaping your thoughts, emotions and behaviour.

There are many parts of a brain that all work together, each responsible for coordinating and performing specific functions.

The parts of the brain that are affected by drug use are:

Brain stem which controls basic functions critical to life, such as heart rate, breathing and sleeping.

Limbic System which contains the brain’s reward circuit, linking together a number of the brain structures that control and regulate our ability to feel pleasure. This feeling motivates someone to repeat behaviours or actions such as eating, that are critical to existence. This is also activated by drugs. The limbic system is also responsible for a person's perception of other emotions, both positive and negative, which helps explain the mood-altering properties of many drugs.

Cerebral Cortex which is divided into areas that control specific functions. Different areas process information from a person senses, enabling them to see, feel, hear and taste. The front part, the frontal cortex, is the thinking center of the brain and powers the ability to think, plan, solve problems and make decision.

How the brain communicates

The brain is a communication center that consists of billions of neurons, or nerve cells. These networks of neurons pass messages back and forth to different parts of the brain, the spinal column and the peripheral nervous system. These nerve networks coordinate and regulate everything we feel, think and do.

Each nerve cell (neuron) in the brain sends and receives messages in the form of electrical impulses. Once a cell receives and processes a message, it sends it on to other neurons. These messages are carried between neurons by chemicals called neurotransmitters – the brain’s chemical messengers.

The neurotransmitter attaches to a specialised site on the receiving cell called a receptor – the brains chemical receivers. A neurotransmitter and its receptor operate like a “key and lock”. This mechanism is intricately specific, making sure that each receptor will forward the appropriate message only after interacting with the right kind of neurotransmitter.

Watch this video to see an animation of this process.

How drugs work in the brain

Just like neurotransmitters are chemicals, so are drugs. They work in the brain by tapping into the brain’s communication system and interfering with the way neurons normally send, receive and process information. Most drugs effect the brain by mimicking or displacing neurotransmitters that naturally occur. This disrupts or distorts the normal flow of information across the synapses.

Some of the ways drugs are thought to exert their effects are:

By affecting the receptor site in exactly the same way as a neurotransmitter.

By causing more of the neurotransmitter to be produced.

Methamphetamines such as Ice work this way, where the nerve cells release abnormally large amounts of natural neurotransmitters. This produces a greatly amplified message. For example, rather than someone whispering they would be shouting into a microphone.

By preventing the breakdown of neurotransmitters.

Which means there is a fake build-up of the natural substance. Cocaine works in this way as it stops the ‘reuptake’ or normal recycling of certain neurotransmitters.

Understanding their role of neurotransmitters within the brain and body help explain the impact of drugs.

Dopamine is well known as the neurotransmitter responsible for feelings of pleasure and is present in several different parts of the brain. Dopamine is also associated with the coordination of movement, logical thinking, emotion, cognition and motivation.

Recreational psychoactive drugs have their first effect on dopamine. The pleasurable feelings of euphoria, relief or excitement that is so intensely satisfying and rewarding is caused by the drug dumping large amounts of dopamine into synapses, or preventing its re-uptake. This the “the rush”.

Dopamine is also linked to survival areas in the brain and when it stimulates these areas it creates a response of “Aaaah, that feels great, do it again”. The effects of dopamine explain why some people use drugs more than once – because most people like to repeat experiences that are pleasurable or ones that reduce suffering (Denning et al, 2004: 75/76).

One of the brains natural stimulants is norepinephrine,  responsible for increasing alertness and mental focus. It is also responsible for the human stress response or “fight or flight” response. When there is a threat of danger, a series of chemical responses prepares us to deal with it by pumping adrenaline into our bodies to allow us to think fast and move even faster. Stress hormones are released by this output of energy which can, over time, weaken the immune system and cause greater susceptibility to illness (Denning et al, 2004).

Serotonin has several complicated roles in the brain including affecting or controlling mood and is associated with depression. Low levels of serotonin are also linked to aggression, irritability and premenstrual syndrome. Serotonin helps regulate sleep, sexual functioning and appetite. Some serotonin cells are responsible for hallucinations. The actions of other neurotransmitters may also be regulated by serotonin. Low levels of serotonin may also result in the dysregulation of neurotransmitters that affect other conditions such as anxiety, panic and pain sensitivity (Denning et al, 2004).

This neurotransmitter acts to relax the brain – often called the “Brain’s Valium”. Certain kinds of brain activity such as hyperactivity or overexcitement are suppressed by GABA without affecting higher cognitive processes. Therefore, the release of GABA produces feelings of calm but the person can remain alert. Not enough GABA produces anxiety and worry. There is also a risk of seizures which are the result of excessive electrical activity in the brain – activity that is calmed by GABA (Denning et al, 2004).

Several different types of chemicals that are all related to a person’s perception and control of pain are called endorphins. Pain can take many forms including physical and emotional and relief from emotional pain may be part of this neurotransmitters role. A release of endorphins not only decreases pain but also induces a sense of well-being and happiness (Denning et al, 2004).

This is found in the hippocampus of the brain where memory formation and retrieval is contained. Anandamide may be associated with forgetfulness, whether this is related to ageing, disease or psychological conditions (Denning et al, 2004).

Glutamate is considered to be the major mediator of excitatory signals in the central nervous system and is involved in most aspects of normal brain function including cognition, memory and learning. Glutamate receptors are involved in a number of neurological conditions including many neurodegenerative diseases and several other conditions have been further linked to glutamate receptor gene mutations or receptor autoantigen/antibody activity.

This helps with memory formation. It also works across several different areas of the brain and body transmitting orders from the brain to the muscular systems (Denning et al, 2004).

Most psychoactive drugs directly or indirectly target the brains reward system by flooding the circuit with dopamine. Dopamine is the neurotransmitter present in the regions of the brain that regulate movement, emotion, cognition, motivation and feelings of pleasure. The overstimulation of this system, with the release of dopamine, produces euphoric effects.

Whenever this reward circuit is activated, the brain notes that something important is happening that needs to be remembered, and teaches us to do it again and again, without thinking about it. This is great when trying to ensure we repeat life-sustaining activities but might be problematic when the behaviour of drug use is reinforced.

In fact, when some psychoactive drugs are taken, they can release 2 to 10 times the amount of dopamine that natural rewards do and sometimes this happens immediately (when drugs are smoked or injected). The effects also last much longer than those produced by natural rewards. These effects dwarfs those naturally rewarding behaviour such as eating and sex and therefore is a powerful motivator to use drugs again.