When a child experiences trauma regularly, the brain’s arousal system becomes constantly elevated because they have no sense about what to expect next. In this state, they struggle to find ways to feel calm, to feel safe, or how to feel in control.

Toxic stress weakens the architecture of the developing brain, which can lead to lifelong problems in learning, behavior, and physical and mental health. 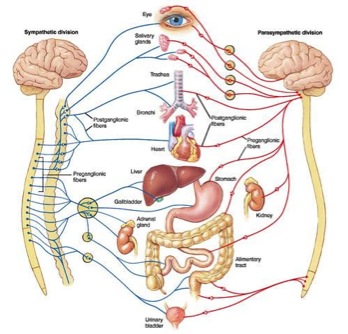 Trauma and the Body

Trauma is locked in the body, and it’s in the body that it must be accessed and healed.  Trauma responses are fundamentally highly activated, incomplete biological responses to threat, frozen in time. (Van der Kolk, 2014)

Our brains and bodies are developed to help us respond to threat.  We refer to this as flight, fight or freeze response.  The Autonomic Nervous System (ANS) has a lot to do with these responses as the control system that largely acts unconsciously to regulate things such as heart rates, digestion and respiratory rate.

All people are evolutionally programmed to flee, fight, or freeze in the face of grave threats. (Peter Levine, 2005)

The ANS is a network of nerve fibres that extend throughout the body connecting the brain with various organs and muscles groups.  This system is mediated by two different branches that work in harmony to deal with the threats we face and then recover.

Firstly, the sympathetic branch activates the physiological changes that rev us up to fight or flee.

Secondly, the parasympathetic branch activates changes needed to calm us down to rest and digest, helping return the body to homeostasis.   This system can also be switched on if the stress continues without resolution.

What happens in the case of complex, ongoing trauma?

This system is designed to be activated for short periods of time, not hours or days or even weeks on end as often occurs for children and young people who experience ongoing threats and stress.

When a child experiences trauma regularly, the brain’s arousal system becomes constantly elevated because they have no sense about what to expect next.  In this state, they struggle to find ways to feel calm, to feel safe, or how to feel in control.  In this situation the following occurs:

Trauma and chronic stress recalibrate the arousal system of children and young people, leaving it switched on all the time.  Therefore, these young people will often, at baseline, be in a state of low level fear.  These young people have learnt that ‘calm’ is not a valuable state of being, they are constantly ‘aroused’ and will be hyper-vigilant.  Being at this higher starting point every day means that events we see as mildly or moderately stressful become fear-inducing for these young people.  Even small changes in the environment can signal a large increase in the experience of stress.

For traumatised children and young people, the best option is to stay alert to danger and consider any change, even positive change, a possible threat (Australian Childhood Foundation)

“Each time a [traumatised person] has a flashback or nightmare, or is merely startled by a sudden sound or movement, his heart, lungs, muscles, blood vessels, and immune system are primed to save his life – from nothing at all” (Beaulieu, 2003)

This state is particularly damaging for children and young people.  Because of their developmental immaturity:

However, often it is these very relationships that create the unending cycle of toxic physiological and emotional stress that they are forced to endure, as such, abused children and young people are often left on their own to survive.

Over time, this state has significant impacts on critical brain structures, particularly as children and young people are developmentally more susceptible to disruption than mature adult brains.  As a result their brain may be in a very different state than that of other young people around them – a calm young person will process information very differently from one who is in an alarmed state.

The young person who is alarmed will be less efficient at processing and storing information.  Sub-cortical and limbic areas will dominate the young person’s cognition and thus they will focus on facial expressions, hand gestures and perceive mood which may be threatening to them.  A young person’s emotional, behavioural and cognitive functioning will reflect this often in a regressed state.

Toxic stress weakens the architecture of the developing brain, which can lead to lifelong problems in learning, behavior, and physical and mental health. Experiencing stress is an important part of healthy development. Activation of the stress response produces a wide range of physiological reactions that prepare the body to deal with threat. However, when these responses remain activated at high levels for significant periods of time, without supportive relationships to help calm them, toxic stress results. This can impair the development of neural connections, especially in the areas of the brain dedicated to higher-order skills.  It has been shown that the connections between structures of the brain are made less efficient,  e.g. the bridge structure between the left and right hemispheres has been found to be smaller and act slower as a consequence of trauma.

“Trauma and exposure to chronic stress experienced during childhood and adolescence shake the foundations of healthy brain and body development.  They alter their trajectory over time.  They trap their development and prevent them from maturing emotionally, psychologically and cognitively.  Children may not progress much beyond the developmental milestones that they had achieved prior to the start of their experiences of abuse and violence.” (Australian Childhood Foundation)

Predictability and a sense of safety can help traumatised young people from staying in a state of fear too long.  With support they can attempt to re-regulate, regain self-efficacy, control and mastery over themselves and their various environments.

Check out this video on the stress response